YAK reflections from a powerful conference

With #GPS2016 focused on growing solutions for Pasifika young people, establishing the Youth Action Komiti to co-create, co-design, co-develop and co-deliver the conference was the obvious first step for Le Va. Made up of 15 inspiring and driven young Pasifika people, it was their phrase that provided the thematic structure for the conference:

If we give full participation with radical acceptance and absolute inclusion, we will unleash the full potential of our young people.”

After the conference we asked members of the Komiti for some of their highlights and reflections on #GPS2016, and what outcomes they hoped to see moving into the future for Pasifika young people in Aotearoa, New Zealand.

Komiti members were proactive contributors throughout all stages of #GPS2016, leading a variety of activities – from creating promotional videos through to co-developing speaker guidelines, recruiting presenters and performers and even curating a Pasifika art exhibition space – all of which enhanced the feel and flavour of #GPS2016.

Komiti members sat on a variety of panel discussions and were MCs across all three breakout streams. They even gave plenary keynote addresses! And if that wasn’t enough, they also designed the dinner tickets and decorated dinner tables on the day, and who could forget the grand opening ceremony?

On top of all of these things, they consistently walked the talk and advocated the purpose and themes of this conference: Radical Acceptance: Absolute Inclusion: Full Participation.

Their voices were captured by the likes of the NZ Herald, Planet FM radio and Tagata Pasifika. They made it clear that young people want to be heard, they want to be listened to, and not just handed solutions but to be a part of the decision-making process.

We are not saying that our elders are irrelevant now and that it’s all about us (young people). We want to understand where we have come from and how we are going to move forward into the future.”

They also remarked on the programme content such as the issue of suicide prevention.

We need to keep talking about these topics so we can address it. It’s not something we can sweep under the rug. This conference is about addressing the issues and not having them too tapu to talk about, and really getting solutions in place.”

…authentic and quality relationships with adults who believe in you and give you opportunities to shine”.

Other reflections included Riki Welsh’s comments on what he witnessed during the suicide and violence prevention stream, which included his comments in the panel discussion on cyber-bullying, self-harm and suicide postvention.

The GPS conference allowed for some extremely important conversations to take place. Never have we seen a conference where experts in the field present their research, which is then critiqued by Pasifika young people who were able to add real, lived experience of suicide attempts and self-harm to the research presented.”

Finally, and unsurprisingly, many of the young people were excited to have the opportunity to meet some of their role models – obvious names such as Sonny Bill Williams and Tofiga Fepulea’i, but also creatives such as Dr Karlo Mila (well known for her fame as a spoken word poet), Jimmy Kouratoras (one of New Zealand’s well-established contemporary artists), corporate leaders such as Leopino Foliaki of Price Waterhouse Coopers, and academic trailblazers such as Professor Richie Poulton, Dr Terryann Clarke and Dr Seini Taufa.

We all confidently agree that #GPS2016 provided a founding platform for positive and proactive outcomes for young people. 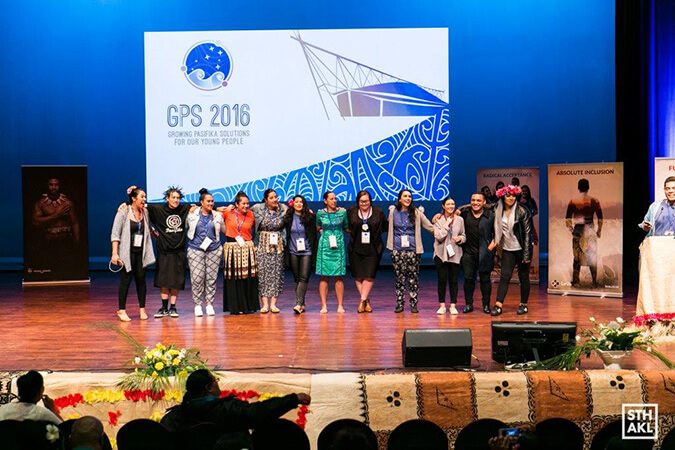