The World in Union (New Zealand) Conference brought together researchers, practitioners, educators, administrators, high performance and the odd ex-player here and there. This year’s theme was “Tackling the big issues, Passing on Knowledge. Kicking it forward.” It followed the inaugural “World in Union: Rugby Past, Present and Future” global summit hosted by University of Brighton England in 2015.

The conference was opened with a traditional cultural Maori powhiri by Massey University and local Iwi. Meihana Durie led proceedings and welcomed all the special guests and participants. It was a valued learning for our international guests.

In the conference I presented in two different sessions, the first session on a panel facilitated by Jeremy Hapeta that 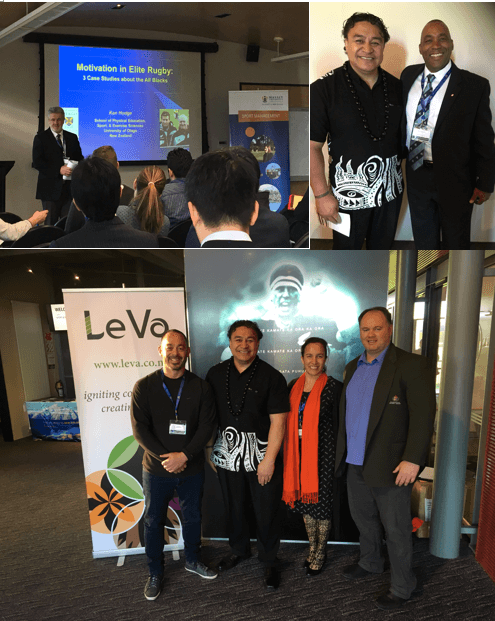 included Robyn Cockburn of the Roles and Responsibility panel for NZ Rugby and ProfessorJohn Evans from the University of Technology in Sydney working with Indigenous athletes in Australia. The topic for the session was on Cultural Competency in Rugby. The room was quite solemn as each panellist shared experiences and research of the challenges faced by athletes of different ethnicity – highlighting the blind and incapable competency that has existed for a century even in the NZ rugby environment. All agreed there was a need for a deeper understanding, empathy and acceptance of the changed landscape that now exists in NZ and world rugby.

The second session was Pasifika Perspectives on Leadership in Rugby led by AUT’s Katie Dee, Gaye Bryham and Lesley Ferkins on behalf of New Zealand Rugby. NZR recognised the difference between the number of Pasifika playing rugby and the number of Pasifika participating in non-playing rugby roles in Auckland. Through exploring the perspectives of Pacific Island rugby community members, the project aimed to help NZR develop a better understanding of this issue of low numbers of Pasifika in non-playing roles. Katie and team presented their findings with my support and explaining many of the concepts and proverbs.

Four key recommendations were made to NZR:

One of my key highlights of the conference was Ken Hodges’ case study focused on the All Blacks during the period of 2004 – 2011. Graham Henry and Wayne Smith were the coaches, with 2011 being the year we won the RWC again – at last! Ken’s title was Motivational Climate in a World Champion team. He spoke of many leadership concepts like ‘Transactional Leadership’ and dual-management models, about the expectation of excellence and more importantly ownership and accountability needed by the players. He also expounded on key turning points that were pivotal to the success of the 2011 campaign.

These of course resonated with me being very familiar with all these salient parts that contribute to All Black success and legacy. But there was something else that arrested my attention – Ken began by talking about a study Wayne Smith carried out on the Spartan Warriors of Sparta. He discovered the key ingredient to the Spartans motivation to fight. It was an important ingredient that the All Blacks adopted and still live by today. It absolutely influenced the All Blacks in the way they lived, impacted their approach to performance, but what really warms my heart about this is that it’s a foundational value across Pasifika. It speaks of inclusiveness, it’s holisitc and collectivism. It’s how the Spartans lived and fought, The Spartans were motivated to fight not by fear, nor courage, nor bravery, but for love. This really spoke of strong connections and strong relationships, ‘better people make better All Blacks.’ The All Blacks continue to be successful because their foundations are not about themselves but about others, their families, whanau and their nation – these are a real source of performance.

I met some really interesting people at the conference from different parts of the globe. Administrators, academia, high performance and practitioners, governance, researchers and marketing all there to keep the game alive, and I thoroughly enjoyed and valued the experience.