Strength from within: indigenous solutions for suicide prevention

Preserving our youth and our future is highly reliant upon reaching back into our past.”  (Twyla Baker-Demaray)

Every 40 seconds, a person somewhere in the world will take their own life. While the prevention of suicide is a global imperative, a diversity of initiatives is required to address this disturbing social dilemma. Suicide affects indigenous populations universally at higher rates than non-indigenous populations, and indigenous youth rates are particularly alarming.

As indigenous populations around the world are responding to a call for action from their communities to seek solutions to address suicide, there is an emerging consistency in the identification of significant protective factors against suicide among indigenous peoples.

According to the Suicide Prevention Resource Center (SPRC), the most significant protective factors against suicide attempts among American Indians and Alaska Native (AI/AN) youth are: the ability to discuss problems with family and friends, connectedness to family and emotional health. Research also showed young AI/AN who reported strong ties to tribal culture and spiritual orientation were half as likely to report a suicide attempt in their lifetimes.

Similar inspirational stories of success are making headlines in Australia.

Gayili Yunupingu, a member of the Gunyangara community at Galupa in Nhulunbuy (below) has single-handedly reduced the rate of suicide in her community from extremely high rates to zero.

Since Gayili commenced responding to calls for help from people considering taking their own lives and their loved ones, not a single death by suicide has been recorded in the remote community. She does this voluntarily 24-hours a day.

Community members put the success down to a “care factor” where the community know there is someone out there to help them. Wesley Mission chief executive Keith Garner said education about suicide needs to be delivered in a culturally sensitive way.

“It’s not from above down. It has to be from beneath up,” Dr Garner said.

It has to be in the community that people are able to shape the particular networks they belong to — that works well in an indigenous community.” 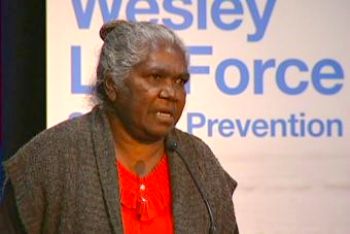