Lessons learned: From one father to another

As Father’s Day has just passed, I reflect on the many fatherhood lessons I’ve learnt. I have so much to be thankful for in the way my father raised us, what I learned from him, and in the sacrifices he and our mother made to ensure we had everything we needed. Right from the first time we opened our eyes.

I can’t help but think about the moment I first became a father. Holding my daughter in my hands after seeing my wife go through what seemed like a lifetime of labour, then birth, and thinking to myself… “I’ll never do this to you again!” I looked down at this little human and suddenly felt as if a whole new compartment had opened in my heart. I was filled with an overwhelming love towards my newborn child – it felt as if my heart would burst. I cried with joy.

“Among adolescent girls, those who have strong relationships with their fathers are less likely to report experiencing mental illness1.”

My eldest daughter is almost 22 years old now and she is joined with four vibrant and active younger brothers. Even in all that time, the overwhelming love is still present – front and centre.

I decided as a new father, to be the best cheerleader for my kids in whatever they did. They had to live through my busy and demanding sporting life (which included playing full time in different, foreign countries). When I retired, and my two older sons were 6 and 7 years old at the time, I wanted them to experience what I had – so I went with them to join a rugby club and play a team sport, learning the values that team sports offered. And yes, I also wanted to see if they had any of their father’s genetics and ability!

“Boys with fathers are more likely to be encouraged to take healthy risks in life.” 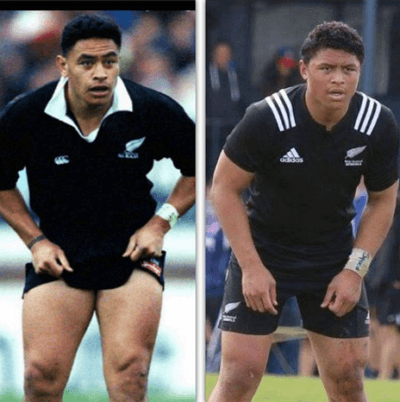 Their coaches asked me to act as a parent coach for the boys on the field, encouraging and organising them during the game. That was quite a challenge as I had done that professionally as a player, but never with children! And my own children at that! However, I welcomed the role though as I knew I would be on the field with my boys.

A couple of weeks later the boys had a game, and I slipped into my role. Things didn’t go as planned. I thought I was helping to organise them, but instead I found that I was only successful at sending both of my sons off the field, for behaviours befitting of a red card!

I quickly realised the ugly truth – that it was me that provoked both situations. My sons were talking and reacting to me on the field as Dad – but I was treating them like bad rugby players.

I learnt two things at that time.

“Any man can be a father, but it takes a special someone to be a dad.”

These are some of the things I want my sons to learn as they grow into men, and if they become fathers. Our role as a dad is hugely important. We have to focus on being the best dad we can be. It is not enough to be there – dads need to engage with their children and be involved in their lives. The benefits of being a present father far outweigh the high price of absence. We have the biggest opportunity to influence the world through children.

“Close relationships between adolescents and their fathers are positively associated with adolescents’ psychological wellbeing.”

An acronym for FATHER:

F – Fatu, a father’s heart for his children.

A – Alofa, a father’s love is unconditional for his children.

T – Teacher, a father who teaches his children to face the world around them.

H – Hope, a father is a source of hope for his children and family.

E – Encourager, a father should be his children’s biggest cheerleader.

R – Rock, a father is the solid rock for his children in times of adolescence, life and change.

“A Great dad makes memories, goes on great adventures, puts his family first, makes sacrifices, is patient, always makes time for his kids, is a great teacher, loves his kids and their mother UNCONDITIONALLY.”

On behalf of the team at Le Va, we all acknowledge our fathers, the heart, the love, the teacher, the provider of hope, the encourager, and the rock they are/were to us. We love them for all the sacrifices they’ve made in our lives.

We wish you, and all the fathers out there, a Happy Father’s Day!