Le Va was honoured to be invited to co-facilitate an international symposium in Japan on suicide prevention, convened by Dr Jemaima Tiatia-Seath and in collaborACTION with some of our regions leaders in Pasifika suicide prevention.

The 7th Asia Pacific regional conference for the International Association for Suicide Prevention in Tokyo hosted more than 500 people from 29 countries, and #FLO was part of this! Entitled ‘Pacific peoples and suicide: Altering the conversations’, the symposium showcased innovative research for Pasifika from Hawaiian, Micronesian, Samoan, Tongan and Cook Islands perspectives – with Le Va’s FLO: Pasifika for Life programme providing evidence of translating research and policy to practice.

An overarching key message across all countries involved was that there is a clear distinction between Pasifika and ‘mainstream’ solutions, with different risk and protective factors. All contributors reflected on the way in which Pasifika communities think about, talanoa and approach suicide prevention.
It was such an honour for chief executive Dr Monique Faleafa and FLO clinical manager Denise Kingi-Uluave to present alongside University of Auckland’s Dr Jemaima Tiatia-Seath and Eliza Puna, as well as the amazing Professor Deborah Goebert from University of Hawaii, and the esteemed Professor Kirk Johnson from the University of Guam.  Their research that was presented is outlined below.

Also don’t forget to check out a blog from PhD student Eliza Puna. 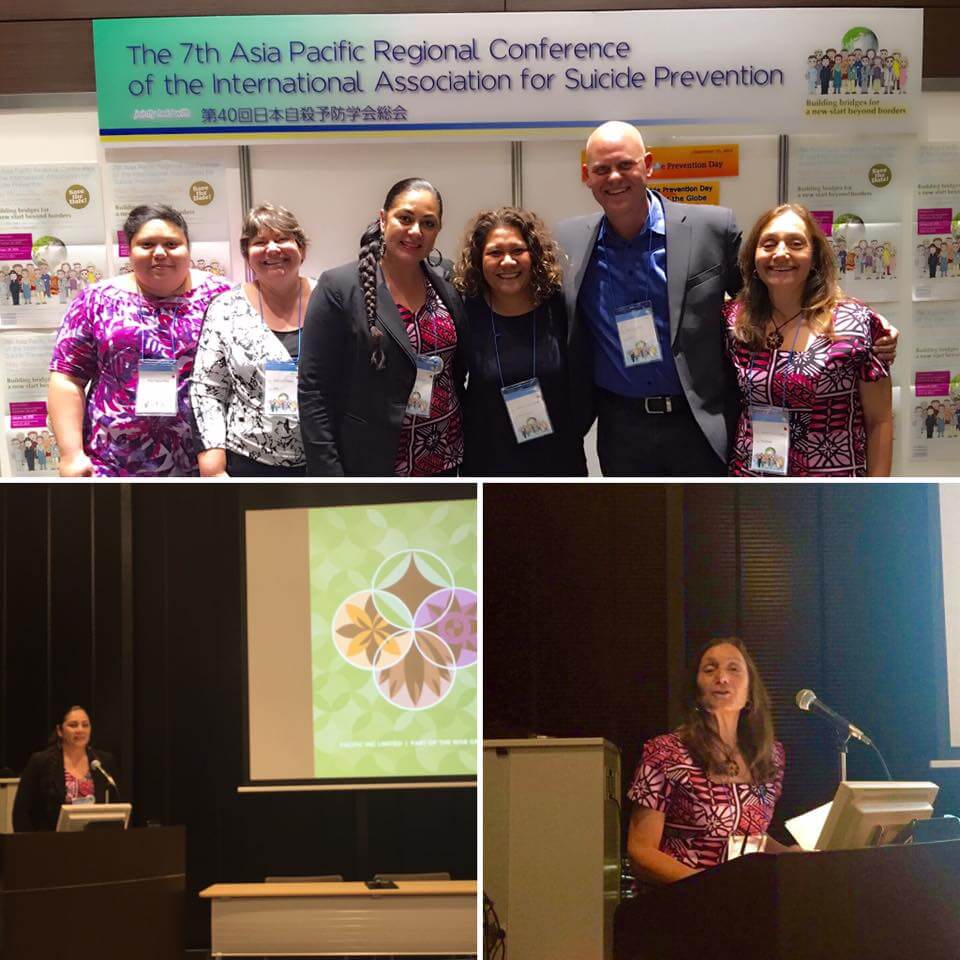 Two qualitative studies were undertaken in Aotearoa New Zealand – Study A examined ‘Suicide and Samoans: The Journey Towards Prevention f (2014) and Study B, explored eSuicide Prevention for Tongan Youth in New Zealand’ (2015). Both studies pinpointed salient issues impacting upon suicidal behaviours for these populations as well as identifying protective and resiliency factors for suicide prevention. The primary objective of these studies has been to inform the development of culturally effective, relevant and appropriate suicide prevention initiatives to better serve Samoan and Tongan youth, families and communities.

Study A involved 22 interviews with Samoans who had attempted suicide and/or experienced suicide ideation, were 18+ years, and were enrolled in a mental health service. Participants were asked to share their views around risk and protective factors, mental health service delivery and what they believed could work for Samoan focused suicide prevention. Study B involved interviews with 23 individuals (n=13 Tongan families) bereaved by suicide. The young suicide decedent fs siblings ranking immediately before and after were interviewed. Where there were participants from the same family, parents/caregivers and siblings were interviewed separately. Participants in this study were asked to share narratives around their family, cultural and ethnic identities, what they believed may have contributed to the suicide of their loved one, and ways forward for Tongan focused youth suicide prevention. A major theme to emerge from both studies is the disconnect for some youth, particularly in light of traversing through multiple identities, be it cultural, ethnic and/or social, and underpinned by the juggling of Pacific and western worlds. Finding meaningful connection whilst remaining within traditional boundaries of Samoan and Tongan sacred spaces, as well as facing the inequalities and inequities of the larger dominant culture, highlight the complexities of what it is like to be a Pacific young person in New Zealand.

In Hawai ei, suicide is the second leading cause of death among youth, with the highest rates among indigenous Hawaiian youth. Despite numerous intervention efforts often based on a gatekeeper strategy where natural helpers are trained to identify subjects at risk, assess risk and make referrals, Native Hawaiian youth continue to experience among the highest suicide rates in the Nation. The Hawai ei fs Caring Communities Initiative for Youth Suicide Prevention partnered with youth-led groups in rural communities to raise awareness about youth suicide prevention and encourage community engagement through positive youth development. Youth groups were trained on safe-messaging and guided through the process of creating their own youth suicide prevention awareness activities under the guidance of supportive adults. Although gatekeeper programs have proven their efficacy in nation-wide studies, our research demonstrates that in rural settings involving indigenous populations, gatekeeper programs are better accepted when they can be culturally tailored and more effective when implemented with locally-driven and cultural activities involving the youth.

Professor Kirk Johnson, University of Guam: Why aren’t old people killing themselves: Exploring the generation gap and the stark realities of youth suicide in Guam and Micronesia

This paper seeks to explore suicide in Micronesia as a social phenomenon by framing it within the context of history and culture. The dynamic realities of social change over the past three generations has resulted in youth, particularly male youth, finding themselves in a strange purgatory trapped between traditional gender roles and family ties and a newly emerging modern economy founded on Western style education and paid employment both set against a culture of contest and competition that promotes the individual over the group which fundamentally at odds with Micronesian value systems and cultures. While an older generation struggles with these many changes taking place around them they still find their place in the family and in the society and the values that have sustained them through some of the worst times still embolden them today.  Young people find themselves rejected, both by the traditional culture in which they have no knowledge or skill and by the modern educational system that places such a high value on individual success and test scores.

Suicide in New Zealand is an ethnically disproportionate issue. Māori and Pasifika people are at higher risk than the general population, particularly young people. Two indigenous led non-government national organisations, Le Va (Pasifika) and Te Rau Matatini (Māori) have come together to address the disparity and deliver Waka Hourua: National Suicide Prevention Programme for Māori and Pasifika Communities on behalf of the Ministry of Health. A key feature of New Zealand’s cross-government Suicide Prevention Strategy 2006-2016 is a clear focus on suicide prevention for Māori and Pasifika and building their capacity to prevent suicide by supporting stronger leadership and culturally relevant education and training. Le Va’s FLO: Pasifika for Life is designed to achieve these objectives for Pasifika families and communities through its inter-related workstreams with a strong emphasis on a culturally relevant suicide prevention education programme FLO Talanoa.

FLO links in with communities, families and organisations so that multiple groups are contributing to building resilient and flourishing families at multiple levels across New Zealand in a coordinated way. FLO consists of four streams that are interconnected and interdependent:

Le Va has engaged with Pasifika communities throughout New Zealand so that they have meaningfully contributed to the development of the first national suicide prevention programme for Pasifika people.

Background: The Cook Islands (CI) is prefaced with a continual downward population trend however still depicting a youthful population structure despite this trend. Statistics show that over 90,000 Cook Islanders reside outside of the CI with over 50,000 in New Zealand and over 30,000 in Australia. The New Zealand Mental Health Survey (2006) showed that Cook Islanders reported a higher prevalence of mental disorders and those most affected were mainly New Zealand born CI rather than those born in the islands. Given the free association between the CI and New Zealand, it is important to examine these understandings.

Aim: This research explores the perceptions of CI youths f toward positive mental health and wellbeing in order to promote wellbeing and decrease suicidal behaviours among youth in the CI.
Objective: An emphasis is placed on a strengths-based approach examining key risk and protective factors as it allows for deeper understanding and appreciation of CI worldviews and way of life.
Methodology:  This research utilised a qualitative method by interviewing CI youth born and raised in the CI aged 16-24 years. A semi-structured questionnaire and the Pacific research process were utilised for one-on-one face-to-face interviews in Rarotonga, CI.

Results:  Preliminary data will be discussed in light of identity, culture, family and spirituality and their important role in promoting positive mental wellbeing and suicide prevention for CI youth. Moreover, an ethnic specific approach is vital as it understands and appreciates CI worldviews.

Conclusion: This research fills a substantial gap in the area of CI youth and suicidal behaviours. These perspectives are important toward informing better mental health and suicide prevention approaches targeted toward CI youths’.