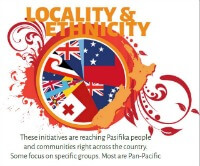 Our 17 Pasifika community funded initiatives are nearly all complete. Here’s a summary of the results and a description of all the initiatives.

Once all completed project reports are collected, we’ll announce the production and availability of multiple resources, such as DVDs, hard copy handouts, educational tools and guidelines, which will be available to all Pasifika communities. We acknowledge and thank all our community funded initiatives for sharing the journey travelled, and the knowledge collected, with all Pasifika.

All of these initiatives:

Kinetic Wayfinding – “The Tautai of Digital Winds” – South Auckland
Promoting messages of hope and resilience to targeted Pasifika youth in South Auckland through Creative arts performance. Addressing issues such as suicide, cultural alienation, disconnection and identity – and where to find help when you need it.

Youth TEAM Trust – Hair 4 Life – Auckland
Development and delivery of a tailored brief intervention for hairdressers and barbers, who often connect personally with Pasifika and Maori youth. The focus is on how and where to encourage clients to access the right help when they need it.

Legacy Performing Arts – Leo O Tamaiti- West Auckland
Educating up to 50 church based Pasifika young people on well-being, how to keep safe and get help if they need it, who then share their perspectives via a theatre/choral performance highlighting key tactics in suicide prevention.

Bianca Fallon – Media Makeup – South Auckland
Enhancing self-esteem and upskilling for Maori and Pasifika young women through the delivery of  make-up workshops with a focus on holistic well-being.