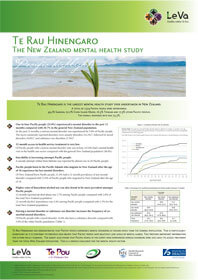 Le Va and the Research programme within Te Pou have developed a poster to promote Te Rau Hinengaro to the sector.

Te Rau Hinengaro was the largest mental health survey ever undertaken in New Zealand and is a groundbreaking piece of research. The survey demonstrated that Pacific people experience mental disorders at higher levels than the general population.

This is particularly significant as it is contrary to previous held beliefs that Pacific people have relatively low levels of mental illness. This provides important information for future policy planning.

The survey also found that Pacific people in the survey who experienced serious disorders were less likely to access treatment than the total New Zealand population. This is a serious challenge for the mental health sector.

Anecdotal evidence suggests that many Pacific mental health service providers and clinicians are unaware of the survey.

Key findings highlighted in the survey and poster