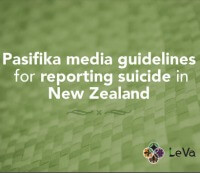 Suicide prevention is a concerning public issue and its challenges and complexity mean no single initiative or organisation can prevent suicide.

We know our Pasifika media can play a key role in leading safe messaging in reporting suicide to our Pasifika communities.

These guidelines have been co-created with Pasifika media organisations and, due to demand from Pasifika media outlets, three accompanying workshops were co-developed and facilitated by Le Va and respected Pasifika journalist Sandra Kailahi to more than 50 media staff.

Le Va would like to thank the 23 Pasifika media organisations that contributed to the co-development of these guidelines, and our FLO media workshops, and for their ongoing dedication and support for suicide prevention.