In warfare and health, not changing is not an option. Technology and globalisation have seen to that. So, it was wonderful to receive an invitation by the New Zealand Army to Le Va to deliver its national suicide prevention training (LifeKeepers) programme to its personnel, starting with The Army Depot (TAD) in Waiouru. TAD is the entry point for all personnel starting a career in the NZ Army. TAD provides recruit training for the New Zealand Army in order to provide skilled and combat-focused soldiers for operational deployments. This is a brave and innovative initiative by the New Zealand Army, to ensure that they as an organisation were providing the right skills to their personnel who will be the front face of the NZ Army, to the hundreds of recruits seeking a life career within the NZ Army. This includes recruits with diverse cultural backgrounds who will find the shift to a military life challenging. This change will be profound and how the NZ Army manages this process is important. Thus, the request to Le Va and LifeKeepers.

Given my background as a soldier in the NZ Army, I was honoured and fortunate to be part of the Le Va’s LifeKeepers team that delivered three workshops to the NZ Army Depot in Waiouru. Suicide by its very nature is a taboo subject so managing and facilitating a safe space to talanoa was essential from the beginning.  Besides the cold climate of Waiouru, there were several challenges for Le Va and from the Army personnel attending LifeKeepers. The most obvious being the organisational culture and language. There is a vast difference between the norm in civilian/corporate life and that of soldiers who work and breathe in a profession of arms, and yet these seemingly polar viewpoints were traversed by the LifeKeepers professional application of talanoa and Va; that is respectful relationships.

So, what exactly did the LifeKeepers team do to nourish the Va and facilitate talanoa?

Following its precepts of authentic engagement in Engaging Pasifika, the LifeKeepers team sought out the relevant cultural experience that would be essential in nourishing and maintaining the Va. One was enlisting my help, two by analysing and discussing some of the cultural norms within the NZ Army and finding out what the enablers are for healthy authentic engagement. We know as Pasifika, relationships are vital in everything. Knowing the language of a particular group is a great enabler by including a soldier in their planning and delivery, LifeKeepers were able to tailor the workshop’s content to fit the unique environment of the NZ army.  The effectiveness of this tailor-made delivery was evident, as the soldiers/participants felt safe to talk about the realities of their experiences. The feedback was honest and open, and from my personal experience soldiers don’t often engage with groups/parties outside of their own families/communities. What we had in Waiouru was different, we had soldiers who weren’t afraid to ask the hard questions, point out the realities of their world but more importantly, share their own stories. I remember returning from my operational deployment in Timor Leste and having to go through a debrief session. I know that I wasn’t fully engaged in that debrief because I wasn’t comfortable sharing my experiences, unless it with the brothers and sisters who had served alongside me. My priority was to get back to cleaning my kit (weapons and equipment) and getting home to my family as soon as possible. What I saw during the Waiouru LifeKeepers workshop was unlike my experience. Soldiers were welcomed and warmed up by Denise and Joseph, soldiers began to realise LifeKeepers was a different animal, and more importantly, could help them save a mate or a loved one’s life. If there is one paramount duty of a soldier,  it is watching your mates ‘Six’ (their back) and being there for family.

Information is key in the Army, one thing you do not do is create mushroom environments. The army views each individual soldier as a sensor of the larger unit, independent thinkers who know what the commander’s intent or mission is. Talking about suicide requires evidence-based information and research that participants can utilise to make informed decisions and when necessary ask the hard question “are you having thoughts of killing yourself?”. LifeKeepers is a NZ based programme and something kiwi soldiers could relate to. Here is a programme that gave them good intel and more importantly provided reflection and learning to add to their personal and workplace experiences as well.

My assessment of LifeKeepers training in Waiouru? I think the NZ army found great value in the Lifekeepers programme and there was an authentic commitment from the NZ Army to gaining more insight, tools and techniques. Ultimately, the success of the Waiouru LifeKeepers workshops came down to understanding the cultural context and the use of language! From the very start as recruits, soldiers are taught the importance of 3CI, Courage, Commitment, Camaraderie and Integrity. A key aspect of LifeKeepers is C.A.R.E: Connecting with Compassion, Asking with Courage, Responding with Confidence, and Engaging with Care. Soldiers commented on the synergies between 3CI and C.A.R.E. For most organisations, values are a rhetoric of the organisational brand. For soldiers, values are the core of their existence as warriors, whether it is in their everyday life to the most challenging of environments of War. When soldiers see the passion and commitment of my LifeKeepers colleagues, modelling the precepts of C.A.R.E. they developed a connection, were able to visibly see that Le Varians do not ‘fake’ it and aren’t selling a snake oil product. One soldier who had just practised a scenario said to us, “When I asked my mate, “are you thinking of killing yourself?” it was hard, even though we are just practising in a classroom. You know I would have probably stuffed it up in real life, this was good”. Ultimately, there was an acceptance that they (the soldiers) were practising C.A.R.E instinctively. LifeKeepers provided the information, tools, resources, and formal framework they could add to their survival bags.

Thank you to Denise and Joe for including me in your LifeKeepers team. It was a great opportunity to help my brothers and sisters in the Green. My love, respect and thanks to Tūmatauenga and the NZ army for sharing your personal stories and experiences and hosting LifeKeepers in Sunny Waiouru faafetai le avanoa. 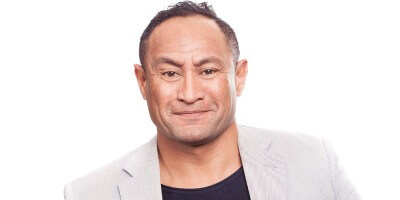 About the author • Apollo Taito

I joined Le Va in May 2017 and want to develop health services that are innovative, relevant and service user and family/aiga centred.